xxxxxThe Russians became interested in Alaska after the Danish navigator Vitus Bering, working on their behalf, began exploring the coastal area in 1728 (G2). During the reign of Catherine the Great a trading company was formed in 1774, and a permanent settlement was established on Kodiak Island ten years later. Then, under Tsar Paul I, a commercial centre was opened at Sitka in 1799, and the Russian-American Company was formed to control and regulate the fur trade. At first this trade flourished, but by the 1850s the near extinction of the sea otter put the Company in the red. The Russians then began to question the wisdom of holding on to this vast wilderness and, indeed, their ability to do so. They realised that they could not successfully defend this remote region against the British, who clearly had designs on the area. In 1867 they sold Alaska to the United States for only $7.2 million (under 2 cents an acre), but the purchase was not without its critics in the States. It was called “Seward’s Folly” by many, a reference to William H. Seward, the Secretary of State who had engineered the agreement. However, as we shall see, gold was discovered at nearby Klondike in 1896, and at Anvil Creek in Alaska two years later, and the territory was later found to be rich in minerals, particularly coal, petroleum and natural gas. 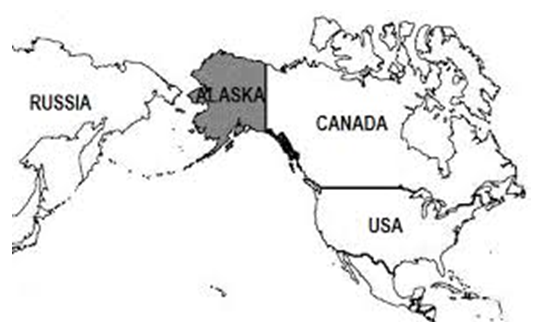 xxxxxAs we have seen, it was in 1728 (G2) that the Danish navigator Vitus Bering, working for the Russian navy, sailed through the strait - now bearing his name - which separates Siberia (part of Russia) from Alaska in North America. Fog prevented him from catching sight of the American mainland, but on a return visit in 1741 a party of men landed on Kayak Island and became the first Europeans to set foot on Alaska. After a brief stay, during which he explored the south-west coast and some of the Aleutian Islands, Bering turned for home but perished on the return journey. Some of his crew made it back to Siberia, however, and reported favourably on the prospects of fur trading in this new region. The year 1744 saw the start of Russia’s interest in Alaska. Fur traders swarmed into the Aleutian Islands and during the reign of Catherine the Great a trading company was formed in 1774 and, ten years later, a permanent settlement was established at Three Saints Bay on Kodiak Island.

xxxxxDespitexintense competition in the area from Spanish, French, British and American hunters and explorers, dating from the 1770s, Russia kept control of Alaska until 1867. Aleksandr Baranov (1747-1819), the first Russian governor, founded the colony’s commercial centre at Sitka in 1799, and in that same year became chief manager of the Russian-American company, established by Tsar Paul I to control and regulate the fur trade. Under Baranov’s leadership a flourishi 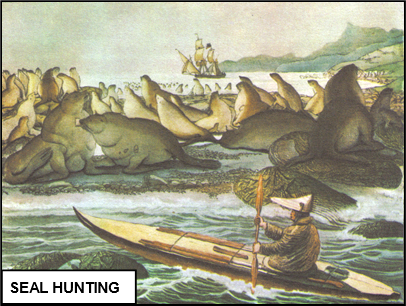 ng trade developed in sea otters and seals, and by his retirement in 1818 over 20 outposts had been established on or near the coast of Alaska. In 1824, in exchange for recognition of the company’s control over the area, Russia granted equal trading rights to all nations in an attempt to put an end to the bitter rivalry between Russian, British and American fur traders.

xxxxxBut by the 1850s Russian interest in Alaska had begun to wane. Although the Russians discovered some deposits of coal, they concentrated their commercial efforts on the fur trade, and when this began to decline in the late 1850s - due mainly to the near extinction of the sea otter -  they began to question the wisdom of holding on to this vast wilderness, and, indeed, their ability to do so. The British, firmly established in Canada and trading via the Hudson Bay Company, clearly had designs on the area, and the Russians, still in the process of developing the outer regions of Siberia, were in no position to defend such a remote area. Furthermore, the cost of running and developing this infant colony was fast becoming prohibitive.

xxxxxIn 1862 the Tsar government refused to extend the charter of the Russian-American Company - by then in severe financial difficulties - and four years later renewed an offer to sell Alaska to the United States, first made in 1859. It reckoned that the disposal of this vast economic wasteland would not only bring in some much needed cash, but would also be a good move politically. The Russians, having won the approval of the American government by their support of the Union during the American Civil War, favoured an American occupation of this region as a means of thwarting  the designs of Great Britain, their political rival in the Pacific and their recent enemy on the battlefields of the Crimea. 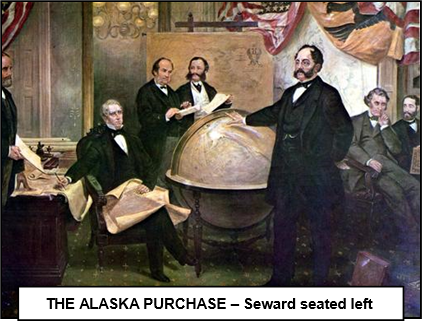 xxxxxThexAmerican Secretary of State at that time, an astute politician named William H. Seward (1801-1872) was an ardent expansionist. He saw the strategic value of the region and was keen to take up the offer as soon as possible. A sum of $7.2 million was agreed during an all-night session in March 1867, the Senate ratified the treaty the following month, and Alaska was formerly transferred to the United States in the October. However, there was opposition to the purchase, and the House of Representatives delayed payment until July of 1868. Though the huge territory - almost 600,000 square miles - was bought for less than 2 cents an acre, critics of the purchase dubbed it “Seward’s Folly” or “Seward’s Icebox”, arguing that the area had no real economic value.

xxxxxFor the remainder of the century the central government of the United States gave little thought or attention to Alaska. For the most part the area was administered by the military or the Treasury department. Within that period, however, critics of the purchase were confounded. As we shall see, in 1896 the territory became the gateway to the Klondike gold fields in the Yukon territory of Canada, and then two years later gold was discovered at Anvil Creek near the city of Nome in Alaska itself.

xxxxxThe U.S. government introduced a measure of civil and judicial administration in 1884, together with primary education, but it was not until 1906 that Alaska was given a delegate to Congress, and not until 1912 that the Territory of Alaska - with its own legislature - was established. The Second World 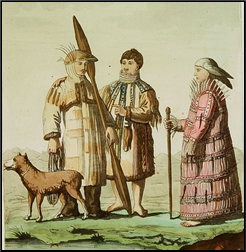 War (1939-1945) hastened political and economic development in Alaska, and the territory was admitted to the Union as the 49th State in 1959. By then its mineral wealth - notably in coal and iron ore - was being exploited, and large deposits of petroleum and natural gas were added to these natural resources in the late 1960s.

xxxxxIncidentally, the name Alaska comes from an Aleut word meaning “mainland”. The Aleuts, one of the early migrant peoples who crossed the Bering Strait from Asia, settled in the Aleutian archipelago around 1000 BC. …… 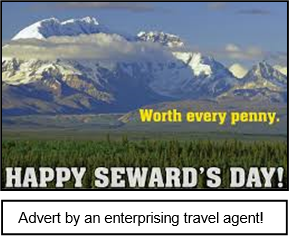 xxxxx…… “Seward’s Day” is a holiday held in Alaska on the last Monday of March to commemorate the signing of the Alaska Purchase treaty on March 30th 1867. It is named in honour of William H. Seward, the man who engineered the agreement between Russia and the United States. ……

xxxxx……  Juneau in south-east Alaska has been the capital since 1900, but the port of Anchorage in the south is the largest city and commercial centre of the state.